The 11th Annual Decatur Morgan Hospital Foundation Dragon Boat Race and Festival presented by Toray (TAM, TFA, and CMA) was held on May 14, 2022, on the Tennessee River at Point Mallard Aquatic Center Beach in Decatur, Alabama. The event was started in 2012 with the aim of raising funds for the Decatur Morgan Hospital, and has since raised over one million dollars. CMA has been the main sponsor since the first competition. The event was being held for the first time in three years as it was canceled in the last two years due to COVID-19.

The opening ceremony kicked off with a Japanese taiko drum (wadaiko) performance. Then the “Awakening of the Dragon” by TAM President Kei Shimaji was held. Shimaji dotted the eye of the dragon which symbolizes the awakening of the spirit of the dragon. This was followed by the races. There were 39 teams consisting up to 25 members, including 20 paddlers, a drummer and a steerer. All skill levels are welcomed to participate, making it a fun and very useful team building sport. Each team participated in at least two races over a 250-meter course, with the winners advancing to the finals.

The money raised this year will go towards funding the hospital’s second robotic surgical system. The surgical robot allows surgeons to perform complex surgical procedures with precision and accuracy. It also offers remarkable improvement in recovery and healing time compared to conventional surgery.

The race and festival were covered by several local news outlets. Toray teams are ready for next year’s races and will continue to support our local community and Decatur Morgan Hospital. 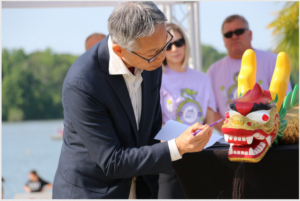 TAM President Shimaji dotting the eye of the dragon 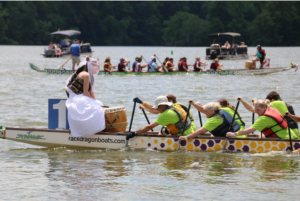 Team “Oar we there yet” which won the Best Dressed Drummer 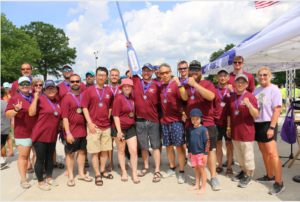