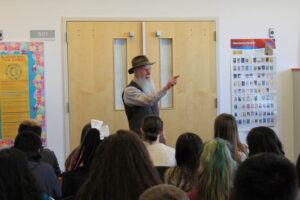 On April 11th, 2018, CMA hosted actor and historian, Lee Stetson, to return as John Muir for three days.  John Muir is considered the “Father of the National Parks”, championing conservations and environmental preservation through journals he maintained during the late 19th and early 20th century.

Playing the part of John Muir, Lee entertained and educated over 600 students at six different middle schools in the Bethel School District, Columbia Crest A-S.T.E.M. Academy, Eatonville Middle School, Cougar Mountain Middle School, Liberty Middle School, Bethel Middle School and Elk Plain School of Choice; located nearby CMA Tacoma.  Stories from John’s youth gave students an idea of what the world was like in the early 20th century; including the wild adventures he had in the great outdoors. Following the tales from John Muir’s life, students were given the opportunity to ask questions, some even thanking John Muir for inspiring them to get out and explore the great outdoors.

CMA is pleased to continue its outreach and CSR efforts to areas nearby its plants across the United States in hopes that students will grow to appreciate the environment around them and strive to improve environmental issues in the future.