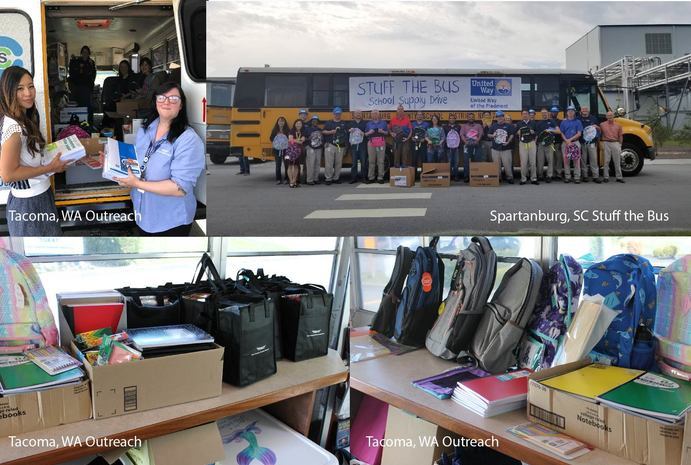 CMA Spartanburg plant worked with United Way of the Piedmont to help the children in Spartanburg County School Districts with back to school supplies, focusing on elementary schools in need. The collection started at the beginning of July and ran through August 1st. The United Way “Stuff the Bus” bus arrived at SP plant on August 2nd to collect the supplies. CMA SP plant has collected $524.63 in school supplies, helping 23 local children in need!

This year during the summer, Tacoma Plant ran a campaign to purchase school supplies for the local Bethel School District. Collection bins were put out in break rooms, and employees were encouraged to fill them with supplies such as glue, notebooks, pens, erasers, and backpacks. Kazumi Kawamura, General Affairs Manager, also came up with the idea to provide Toray branded lunch bags for employees to fill and give back, so that students would also have a place to keep their food.

The campaign was a huge success, with an estimated $1,100 worth of supplies kindly donated by our generous employees. At the end of the campaign, Jay Brower from Bethel School District stopped by with BOB (the Bethel Outreach Bus), to collect the supplies. Members of the General Affairs department, as well as Plant Manager Jeff Hawkey, were on hand to assist Jay in “stuffing the bus”.

Supplies went towards assisting hundreds of students in the Bethel District whose families live below the poverty line.

CMA happily donated $2,000 to the Japanese Supplementary School in Huntsville that provides educational opportunities that are similar to those in Japan to the children of the employees whose companies re-locate them from Japan to the North Alabama region, and the local children who would like to participate. The Japanese Supplementary School operation is supported by Japanese Companies in North Alabama and Toray is one of the main supporting companies.

The Japanese supplementary school’s current total enrollment is 45 students (37 in the elementary level and 8 in the junior high level). They go to a local public school on weekdays, and come to the Japanese supplementary School on Saturdays. The curriculum focuses on the Japanese language and math since they don’t have enough time to cover other areas of study. The school also provides its students with the chance to engage in traditional Japanese cultural events, which can be missed while being far away from their home, such as sports festivals in the fall, Senryu presentation at the beginning of the year, and the bean-scattering ritual. Finally, it is one of the most important places for the local Japanese community to develop friendships.

The donations from Japanese Companies will be used for various expenses such as rent for the University of Alabama in Huntsville (UAH), salary for instructors, insurance premiums, and instructional materials imported from Japan.